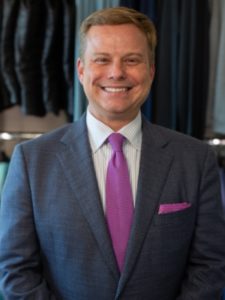 Josh Davis developed a “passion for fashion” very early in life. In fact, he recalls as a child, feigning sickness every time a particular pair of puke-green corduroys were laid across his bed in the mornings before kindergarten. Moving forward, he remembers writing out a list for his grandfather, citing all the benefits of the Ralph Lauren shirt he HAD to have for his 13th birthday. His granddaddy ultimately relented. Josh has now been dressing himself for quite some time, and enjoys helping other men in the community look and feel their very best.

Josh grew up in Selma, AL and graduated from Auburn University with a degree in psychology, which he uses every day in his chosen profession. After procuring employment in Inventory Control at the Saks corporate office in Birmingham for 3 years, he decided he could no longer be contained in a cubicle. It was time to get out in the world and impress people with his ever-increasing amounts of style, taste, and culture. He worked as an event planner for a local restaurant in Montgomery, but never forgot his first love, that Ralph Lauren shirt from so long ago…

Josh met George Wilder in the summer of 2007, and George, instantly beguiled by Josh’s charm and uncanny sense of style, offered him a job at The Locker Room of Montgomery. It was a match made in fashion heaven. Josh not only dresses hundreds of clients each year, but is also the visual merchandiser for the store, and has single-handedly formed the “marketing department” for The Locker Room. He enjoys taking his talents outside the store, coordinating fashion shows, assisting with charity auctions, helping junior cotillion members learn to tie neck and bowties, and lending his keen eye on photo shoots.

Josh is very fortunate, in that he has found a career in which he loves; the people he works with, the clients, and the overall job itself make every day an adventure that he wakes up looking forward to. In Josh’s spare time, he enjoys spending time with his family at the lake and cheering on his nephews at their various sporting events. While you’ll most likely find him in a coat and tie while at The Locker Room, he has to admit that his 2 most important fashion items are his flip-flops (good thing he’s got good looking feet) and his Kaenon sunglasses, both conveniently available at The Locker Room.