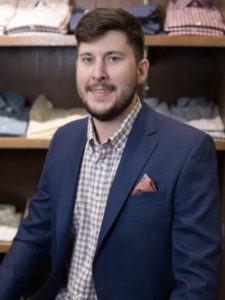 Said Taylor, “As a kid, I went to basketball camps at Auburn. I actually grew up a Georgia fan because of some family ties there. It almost feels wrong to say that working where I work, but the Auburn spirit is contagious. It’s contagious enough that I consider myself an Auburn guy now. I mean, I still pull for Georgia on Saturdays, but I find myself cheering for Auburn football more and more. I go to every Auburn basketball and baseball game I can, and there’s no doubt I’m a full-blown fan there. The fact that I can even admit that should tell you how much I love this town and its’ people. Auburn is a special place, for sure. I‘m lucky to be where I am.”

Taylor has lived in Auburn since 2012. In his spare time, Taylor spends as much time outside is he can. He’s an avid fisherman, mountain biker, and camper. Taylor is the youngest of two children. He acts as a father figure to his nephew, Beckett. “That little guy has my heart. He’s a big reason why I’ve always stuck so close to home.” said Taylor.